If a file is in an ASCII text format with an unrecognized file extension, the Data Import Options dialog appears when opening the file.

The Data Import Options dialog is used to organize tabular data into point databases organized by columns. The dialog appears when the File | Import command is used when importing tabular data from delimited text files (i.e. .TXT). The Data Import Options dialog is also displayed when using the worksheet Import command and when the Show Import Options box is checked in the Paste Special dialog. These file formats are assumed to have one record per line in which each record contains a fixed number of numeric data fields. 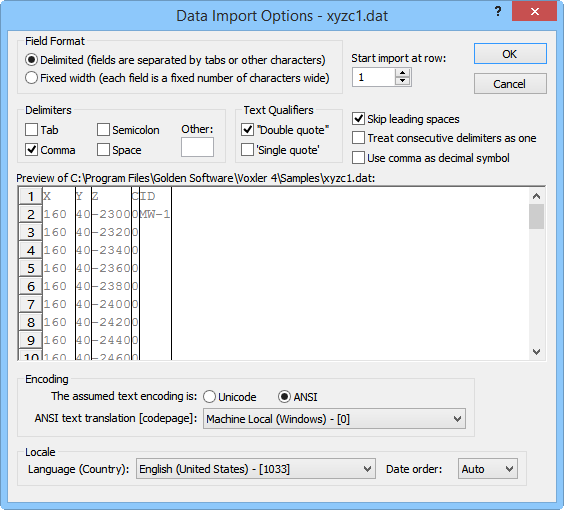 Use the Data Import Options dialog to tell Voxler how to organize imported data into columns.

Choose Delimited (fields are separated by tabs or other characters) if the imported data uses Delimiters (tab, semicolon, comma, space, other) to separate data fields.

Choose Fixed width (each field is a fixed number of characters wide) if the imported data uses a fixed width to separate data fields.

The Delimiters group is used to specify how the fields are separated if Delimited (fields are separated by tabs or other characters) is the selected Field Format. Delimiters controls allow you to specify what characters act as delimiters between fields in a record. Choose the desired delimiters to be used during the import process by checking the box next to Tab, Comma, Semicolon, or Space. You may also enter a custom delimiter in the Other box. More than one delimiter may be checked.

Specify "Double Quote" or 'Single Quote' in the Text Qualifiers group to indicate the correct qualifier to identify text values in the data file.

Check the box next to "Double Quote" or 'Single Quote' to specify that everything between those marks should be interpreted as a single value, and any delimiter characters between any two quote characters are not treated as a delimiter.

Check the box next to 'Single Quote' to specify that everything between those marks should be interpreted as a single value, and any delimiter characters between any two quote characters are not treated as a delimiter.

Check the box next to Skip leading spaces to tell the software to ignore spaces that appear before initial text (not treat spaces at the beginning of the line as delimiters).

Treat Consecutive Delimiters as One

Use Comma as Decimal Symbol

Check the box next to Use comma as decimal symbol if commas are used to as the divisor symbol between whole numbers and fractions. If your data uses commas as the decimal symbol, it is highly recommend that you use some other character for the Delimiters. This option is more common in locations where the thousands separator is the period (.) and the comma is used as the decimal.

The parsed data are shown in the Preview section. The Preview field displays a preview of how the text in the import field is divided into fields to help you set the other dialog controls appropriately.

The Encoding section allows the choice of Unicode data or ANSI data when importing or opening an ASCII data file. Unicode data is often referred to as international data. It would include character sets from Russia, Israel, China, Greece, Hungary, among others. After selecting Unicode, select the ANSI text translation [codepage] option that will read the data correctly. If the data does not appear correctly in the Preview window, the Encoding may be specified incorrectly.

ANSI encoding contains characters within the first 256 characters of a font. These are normally in English.

Click the OK button to proceed with the import process.

Click the Cancel button to close the dialog without importing the data set.