A HeightField module can be exported to different file types with the File | Save Data command, including IV, 3D DXF, and XYZC data files in the following data file formats: CSV, DAT, SLK, TXT, XLS, and XLSX.

Lattice and image are the input type for the HeightField module.

The image on the left shows a HeightField module with a sample data set and uses the Land Colormap.

The image on the right shows a HeightField module with a data set that includes a blanked region.

The HeightField module properties are described below, followed by an example that illustrates how to use the module.

Select the HeightField module in the Network Manager
to display its properties in the Property Manager.

The Contours module contains the following tabs in the Property Manager: 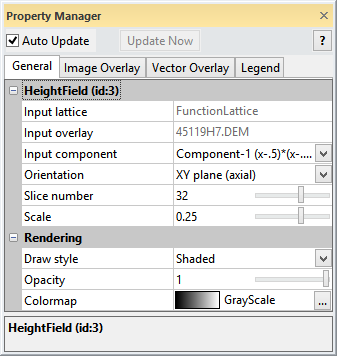 The Slice number is the index of the slice to display. The Slice number ranges from 1 to the maximum number of nodes in the specified direction. The slice number resets to the middle of the volume when the Orientation is changed. It is possible to specify an orientation so that the slice is exactly on edge, in which case nothing is drawn. Rotate the camera slightly to see the image. This option is not available if a single slice exists. To change the slice displayed, highlight the existing value and type a new value or click and drag the

to increase or decrease the slice value.

Scale represents the scale factor when computing the heights (0.0 = no height). By default, the scale factor is set to 0.25 for a uniform lattice and 0.0 for a curvilinear lattice. To change the scale, highlight the existing value and type a new value or click and drag the

to the desired scale factor. The scale is any value between -1 and +1.

With uniform lattices, the more the scale factor deviates from 0.0, the farther the surface projects in the perpendicular direction. The scale factor is normalized by a percentage of the volume diagonal. The scale is computed using the following equation:

Choose the level of opacity. This value ranges from 0.0 for completely transparent images to 1.0 for completely opaque images. To change the opacity, highlight the existing value and type a new value or click and drag the

to the desired value. See Transparency Type for more information about transparency.

The HeightField is colored by mapping the data values using the specified Colormap. To change the colors, click on the existing colormap and select the desired colormap from the list. Or, click on the

to set custom colormap options. The Colormap is not displayed if an RGBA color lattice is used for the Input lattice since the colors are obtained directly from the lattice.